Get me outta here!

Today is a bittersweet day. It’s our last full day in Africa, which is the most amazing place I’ve ever been too. It also marks our last day with Nick, which I don’t like thinking about either! We are excited to celebrate our engagement on our two week European adventure though – lovingly termed the “engagement-moon”.

We arrived in Arusha last night after a 2 hour drive from Amani. We finally saw the peak if Kili too! At least we know it’s a huge mountain, no matter where you look at it from. We only saw the top part through the clouds.

We are staying at Planet Lodge in Arusha, which is a super nice hotel. We wanted to splurge on our last night and enjoy some serious pool time before Nick had to head back. He deserved one relaxing day out of 14 :). Dinner was amazing, as usual, and we ended the night with our typical card games.

Today, we woke up without an alarm (first time on the trip!) and enjoyed a yummy breakfast and some spotty wifi access. Finally got to tell our parents we were alive, which was very exciting! Then, Nick and I headed in to Arusha proper while Brad stayed at the hotel and hung out. We visited the natural history museum and learned all about different animals, the colonization of Tanzania (German, then British) and met a very nice tour guide. He was in university for Art History and showed us some neat things around the museum. He could probably also tell you more about current events than we could! We purchased some awesome art, then headed downtown for lunch at AfriCafe. Delish. Nick had his regular mango juice and a bacon cheeseburger, which I clearly made fun of for the remainder of lunch! I enjoyed some rice and veggies. Gosh the food here is amazing. We headed to the bank so Nick could get out some shillings, went to a super market to buy some African wine, then waiting on our shuttle back to the hotel. I LOVE going to super markets while traveling – you learn so much! You get to see the food, the people, the prices, and there are awesome finds there. Our shuttle arrived (we didn’t realize it was our shuttle at first and ignored it – poor lady had to show us the Planet Lodge brochure to convince us to get in the car!) and took us back to the hotel. We paid for the shuttle after an unfortunate mishap where the receptionist told us it was 80 dollars then we realized she meant 8…

The weather in Arusha always started out cloudy, then got sunny in the afternoon. Today was no different and we got back to the hotel to find Brad lounging by the pool with a nice North Irish family. We grabbed some Safaris and bocce ball and started a rousing game of bocce. Nick won, again. Sigh.

Then, dinner time. Tonight we deemed engagement celebration night, so we had another awesome dinner and enjoyed some South African wine that we got at the market. Nick attempted to teach Brad how to play chess, then we defaulted to our normal card games on our balcony. A great last day in Africa…

Early bedtime – our flight leaves JRO at 4:25 tomorrow AM and our shuttle arrives at our hotel at 1:30! Long day ahead…and trying not to get too emotional about leaving this amazing place. 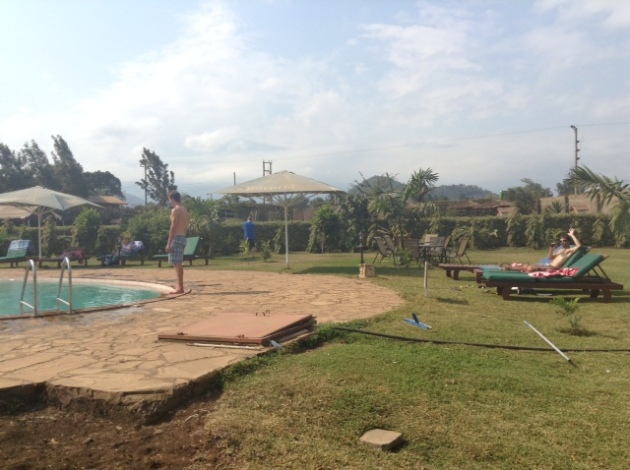 How we found Brad after getting back from Arusha 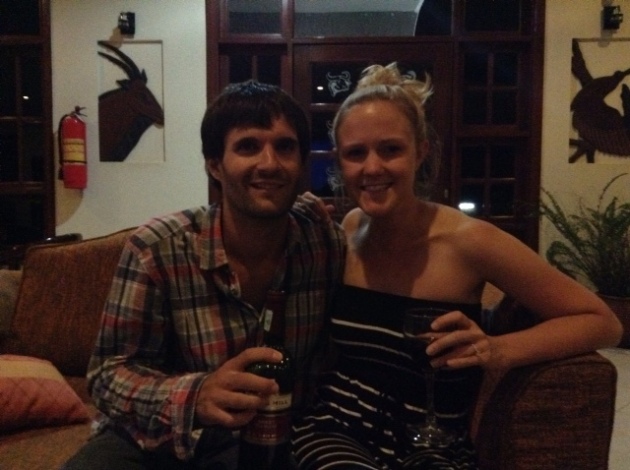 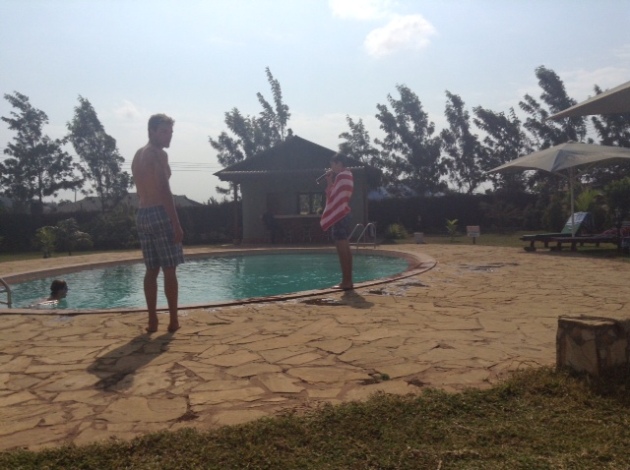 Leave a Reply to David and Sindy Pisha Cancel reply

Reaching the Summit of KilimanjaroAugust 9th, 2013
On top of the world.