Get me outta here!

Brooke here again. Today, we decided to explore more of Budapest on foot during a long run around the city. Good timing since we just remembered that we are supposed to be training for our December marathon…oops.

We headed out of our hotel and ran along the riverside path up towards Hungarian Parliament. We saw a WWII memorial by the Danube River and stopped to read about that for a bit. Then continued into the Parliament neighborhood. The building was gorgeous, but is being renovated so we couldn’t get a ton of great pictures. Thus continues my trend of only seeing buildings under renovation in Europe! Happened in each city I went when I studied abroad. We then ran along a bridge crossing the Danube and ran in to Margaret Island. This is a great little island in the middle of the river. We saw lots of cute restaurants, pubs, fountains, and parks. Then, back on the bridge and over to the Buda side of the river. At this point, the Buda side had direct sunlight and it was nearly 100 degrees, so the running wasn’t as great as we would have liked, but it was still an awesome run. We love running through new cities – you see so much that you would miss in taxis or metros. 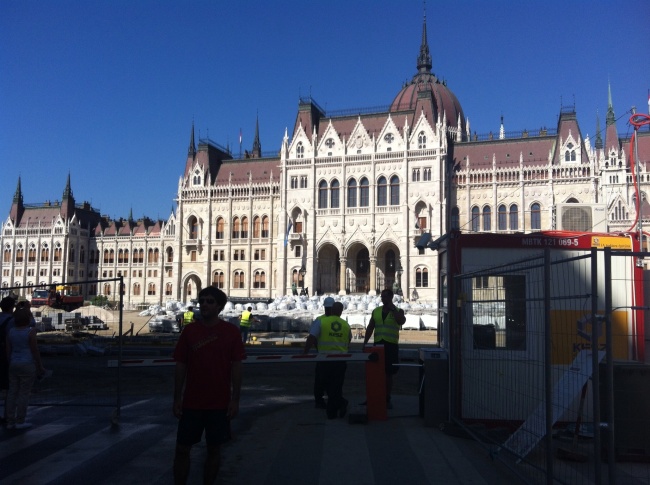 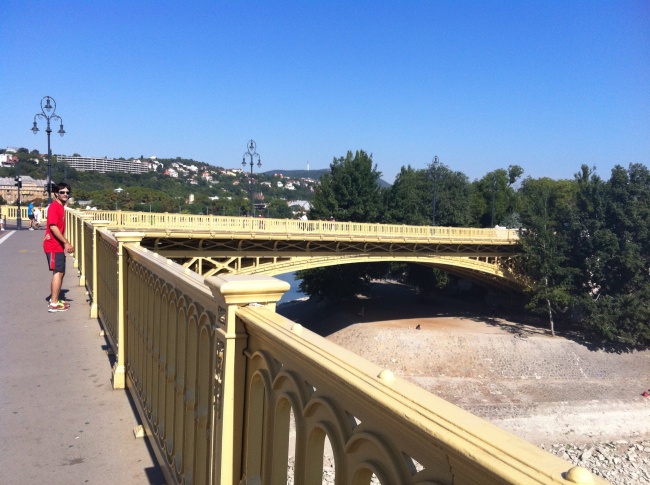 Time for a shower (what? two showers in two days?? unheard of…) then brunch. We had heard that Hungarians have really bought in to the idea of Sunday Brunch (it’s actually not even translated in to Hungarian – just known as Sunday Brunch). This is great for Brad and I because we love Sunday brunch! It’s our tradition to go each Sunday, and we try out new places whenever possible. The Marriott grabbed us reservations at Gellert Hotel, which is well known for their delicious brunch. And it should be! They had so much food and it was all incredible…plus fresh OJ and mimosas. And an amazing dessert table with all kinds of delicious treats. The man at the table next to us brought his yorkie in for brunch and made him a special plate of food. The yorkie didn’t much care for the food, but eventually decided to try some when he realized Alpo wasn’t an option. We love that everyone brings their dog everywhere here and it’s just fine with shop owners and restaurant owners.

We love going to hot springs in the US, so we knew we wanted to try out one of the Turkish baths around Budapest. Gellert Hotel also has the premier bath establishment, so we hit it up after lunch. We also chose Gellert because the baths are coed (which is rare) and people aren’t naked in the coed baths. Neither of us were keen on the idea of being in a bath with naked people. The baths were gorgeous. There was an outdoor pool that had a wave machine (one of the first wave machines ever!), an outdoor medicinal pool with the hot spring water, and amazingly ornate indoor pools that varied in temperature. We tried out all of these and hung out for a few hours – super relaxing and a really pretty setting. I was also quickly reminded of the common fashion trend of men wearing speedos in Europe, which I had previously blocked out of my memory.

We left the pools and headed in to the hills in Buda to check out a church made out of a cave. It was pretty awesome – see the pictures below. Then, down the hills and over the bridge back to our familiar Pest neighborhood. We walked around, did a little shopping, and decided to stop for a quick beer at a cute Belgian-themed pub. They had amazing beer there! We enjoyed our beer outside in the shade and made our dinner/after dinner plans. After a bit more walking and then changing clothes, we went to dinner at Matyas Pince, a Hungarian restaurant with a gypsy band that played songs like Somewhere Over the Rainbow, My Way by Sinatra, and classical music. It was eclectic. Dinner was yummy, and we enjoyed another little city walk. Then, we spent some time on Skype! It was nice to catch up with family – we miss everyone. Off to bed – tomorrow we have a morning left in Budapest then off to Bratislava.
-b&b

Reaching the Summit of KilimanjaroAugust 9, 2013
On top of the world.